By early 2016, the tents at SIRC were coming down.This photograph was taken by SIRC’s friend Narayan Shrestha whose drone captured this aerial view of the Centre, published originally on SIRC’s Facebook page. We do not know the exact date when this was taken. (Courtesy of SIRC.) The exterior of the new addition on the upper floor is nearly complete, but there are still tents to be seen around the site and (just visible) in the courtyard – these had all been taken down by the time we were there before the December 2015 ASCON meeting. 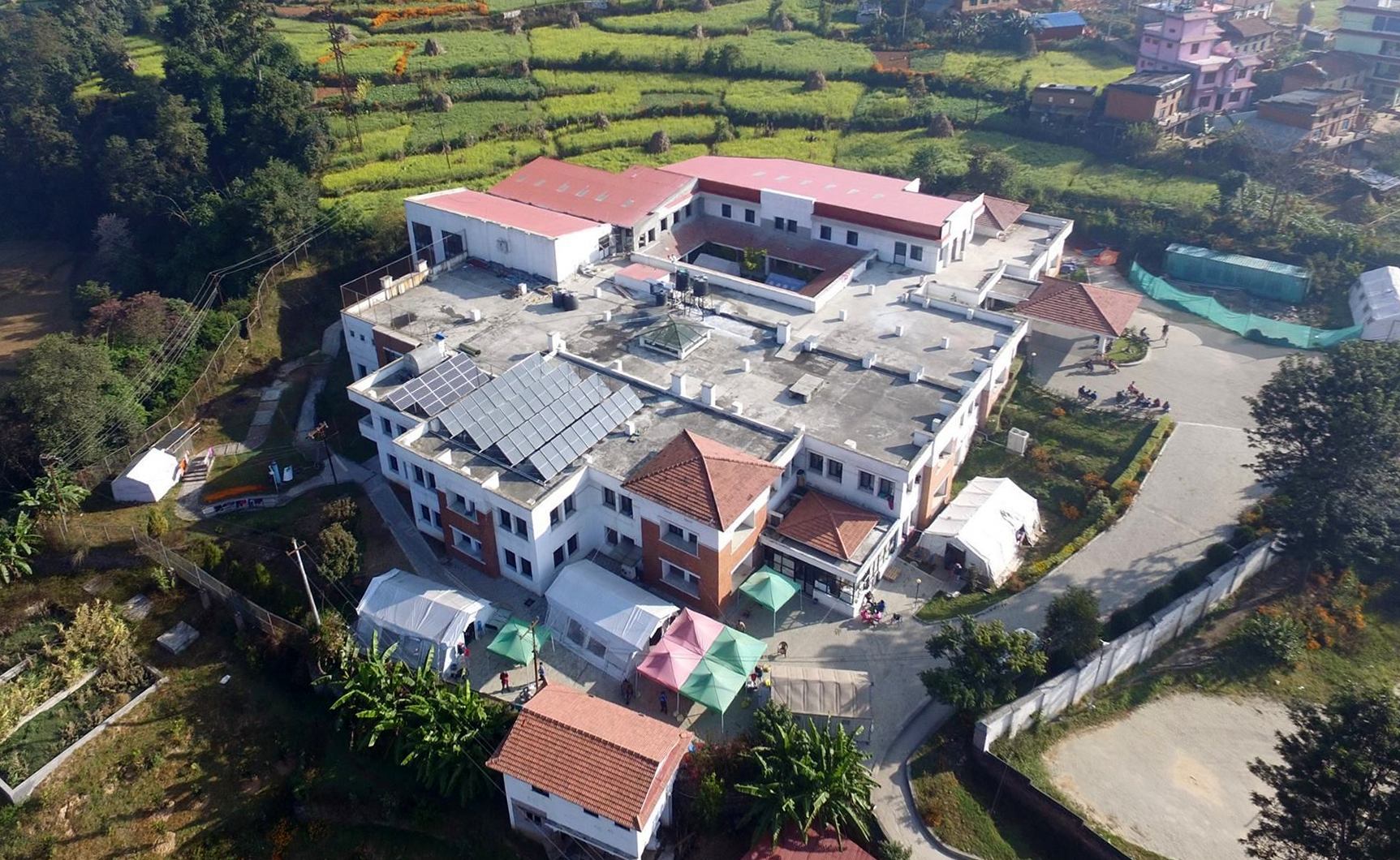 December’s successful ASCON meeting in Kathmandu over, Dr Raju and Sheela (the latter working for SIRC through the fall) had now returned to Dhaka. As the recipient of the 1st Canadian Physiatrists Research and Development Foundation (CPRDF) International Exchange scholarship, Raju was invited to attend the two-yearly review course in Toronto for residents preparing for their exams and arrangements were in hand for a one-week observership in each of Vancouver and Toronto. 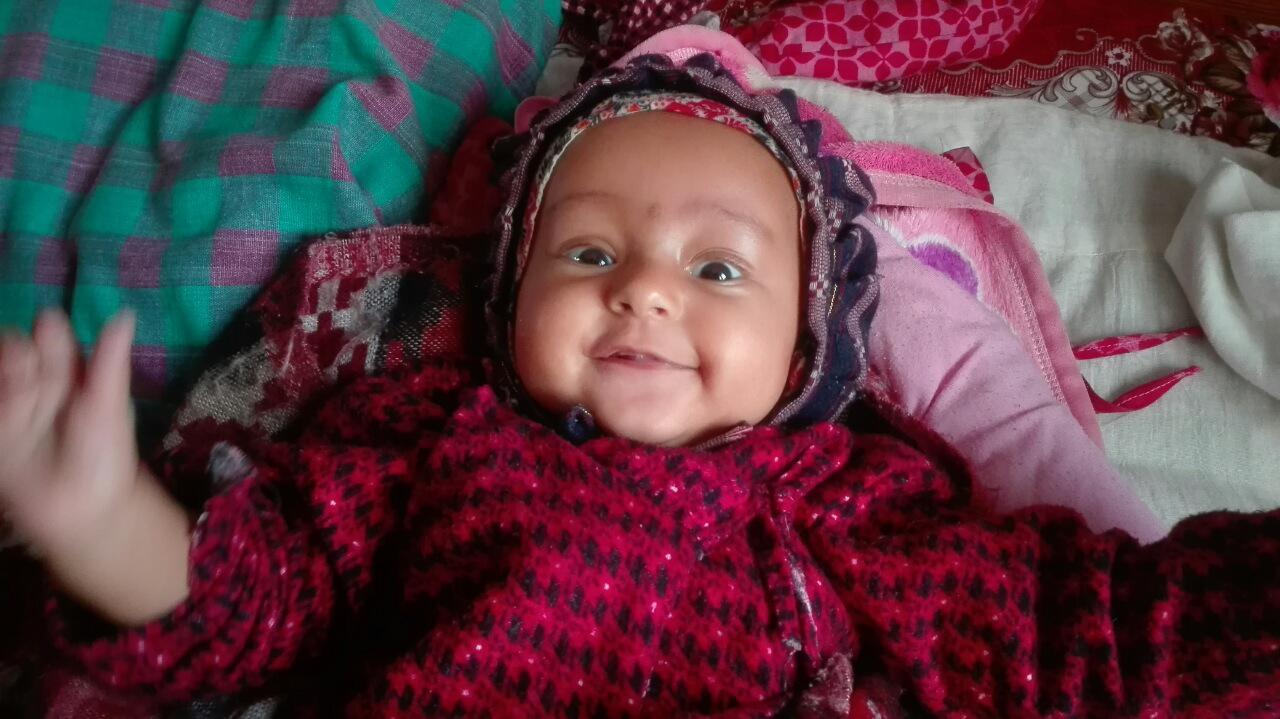 His residency in neurosurgery complete, Prakash prepared for his written Pakistani Fellowship exams in April (in Kathmandu) with the results due about three weeks later. The oral exams in Pakistan were planned for May, then deferred. Laxmi returned to Kathmandu with newly-named baby Ritika (right).

Raju’s CPRDF grant was to provide funds to an International physiatrist to help finance the cost of educational opportunities within Canada and:

He spent a week as an observer with the SCI staff at the GF Strong Rehabilitation Centre in Vancouver before the CPM&R exam review course and a week on the SCI service at the Lyndhurst hospital in Toronto afterwards. This was a fabulous experience for him and we are all indebted to the immense support and effort given by our Canadian colleagues. We had hoped that Sheela, who had just completed her Master’s degree in Public Health in Dhaka (with two gold medals) would be able to join Raju but the Canadian visa authorities decided otherwise. Instead, she elected to return to Nepal to visit family during Raju’s absence. 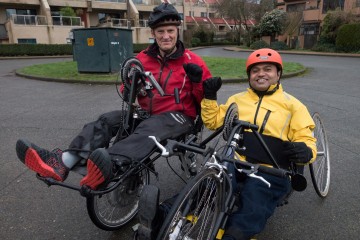 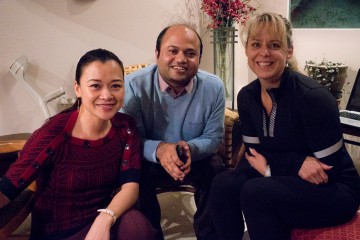 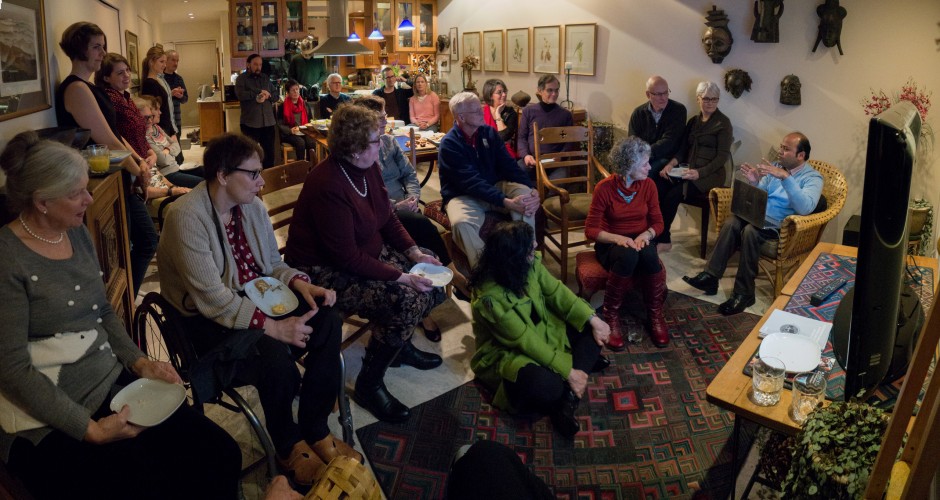 (Right) Raju meets Spine Nepal friends and supporters at a “Meet and Greet” at the home of Claire and Peter.

After a busy week at the GF Strong Rehabilitation Centre, Raju flew to Toronto for the CAPM&R review course, attended by about 80-90 senior residents from across Canada. 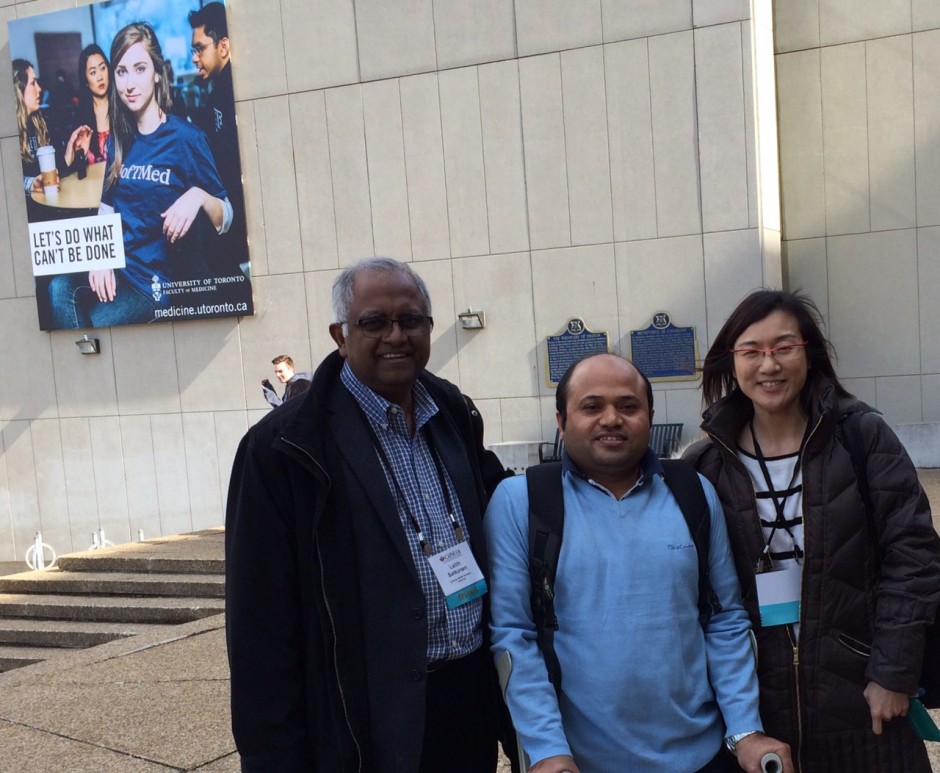 (Left) With 2 faculty members in front of U of T – Basic sciences – Anatomy prosections with Prof. Lalith Satkunam (left) – who is one of the pioneers of and on the faculty of the Review Course. Dr Raju said: “He helped me a lot and expressed interest in going to Nepal. Dr. Audrey Yap (right), is the co-ordinator of the CAPM&R review course and one of the faculty.”

“These were two busy weeks – I am very appreciative of the support of SpiNepal and the CAPM&R review course committee, making it possible for me to attend the 9th Canadian Standards of Physical Medicine and Rehabilitation review course. I had a chance to learn about these academic activities related to PM&R and also a chance to meet a lot of good colleagues and teachers who are most interested to help me develop PM&R activities in Nepal.

After 8 days of review course, I then worked as an observer at the Lyndhurst facility of Toronto Rehabilitation Institute, a specialized Spinal Cord Injury Rehabilitation Center, for 1 week with my Preceptor Dr. Colleen McGillivray. She taught me about the spinal cord system of care from acute care to the community re-integration and follow-up program of SCI Ontario.

I am very optimistic that I can implement similar resources as I work to develop quality Nepalese SCI care after my return to Nepal.”

(Right)After the Toronto trip, Raju gives a talk at another “Meet and Greet” on Bowen Island 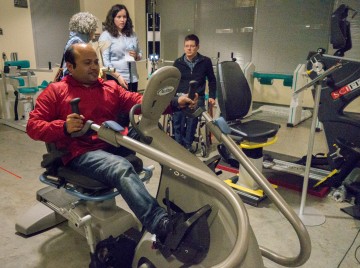 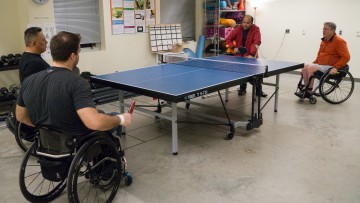 Back in Bangladesh, Raju texted us the morning of March 11th (Sheela’s birthday). He had gone to meet her at the Dhaka airport on her return from Kathmandu. A car made a rapid U-turn and hit him, fracturing his right distal tibia and fibula. They did not stop to assist him to hospital but left the scene, and he had to make his own way to the Emergency department for initial care.

Photos: Raju’s welcome back to Dhaka.

Left: the CT view of his broken ankle. Centre: his temporary splint. Right – more cheerful as the pain settled. Dr Taslim, his supervisor in Dhaka, was very helpful in getting Raju back to work and, as always, his faculty at BSMMU were very supportive. The power scooter provided by his rehab colleagues in Melbourne proved very helpful in Raju’s recovery, while Canadian supporters helped with the costs of care and transportation.

Time Magazine commemorated Nepal’s anniversary of the 2015 earthquake has arrived. SIRC friend Kate Coffey posted in her blog a clear and moving video account of life in contemporary Nepal from Al Jazeera.

Stories abounded of delayed reconstruction and new homes yet to be built. Homeowners were starting to repair houses without government help  with many reasons given including  the blockade of fuel and building materials at the border with India, but the delay was causings much suffering especially for those whose family members have died. An editorial in the The Lancet medical journal focussed on the health effects of delayed reconstruction.

We were able to finally report on the disposition of the funds raised for SIRC’s earthquake efforts through Spine Nepal and friend Kate Coffey. The majority, approximately two-thirds, of contributions received were directed by via Handicap International Canada who collaborated closely with SIRC staff and forwarded for their use the entire amount contributed, a total of almost $35,000. We were impressed with the value obtained for the funds, given here for the sole discretion of the recipient NGO.

Here is a summary table showing how that money was used, taken from the report prepared by SIRC: 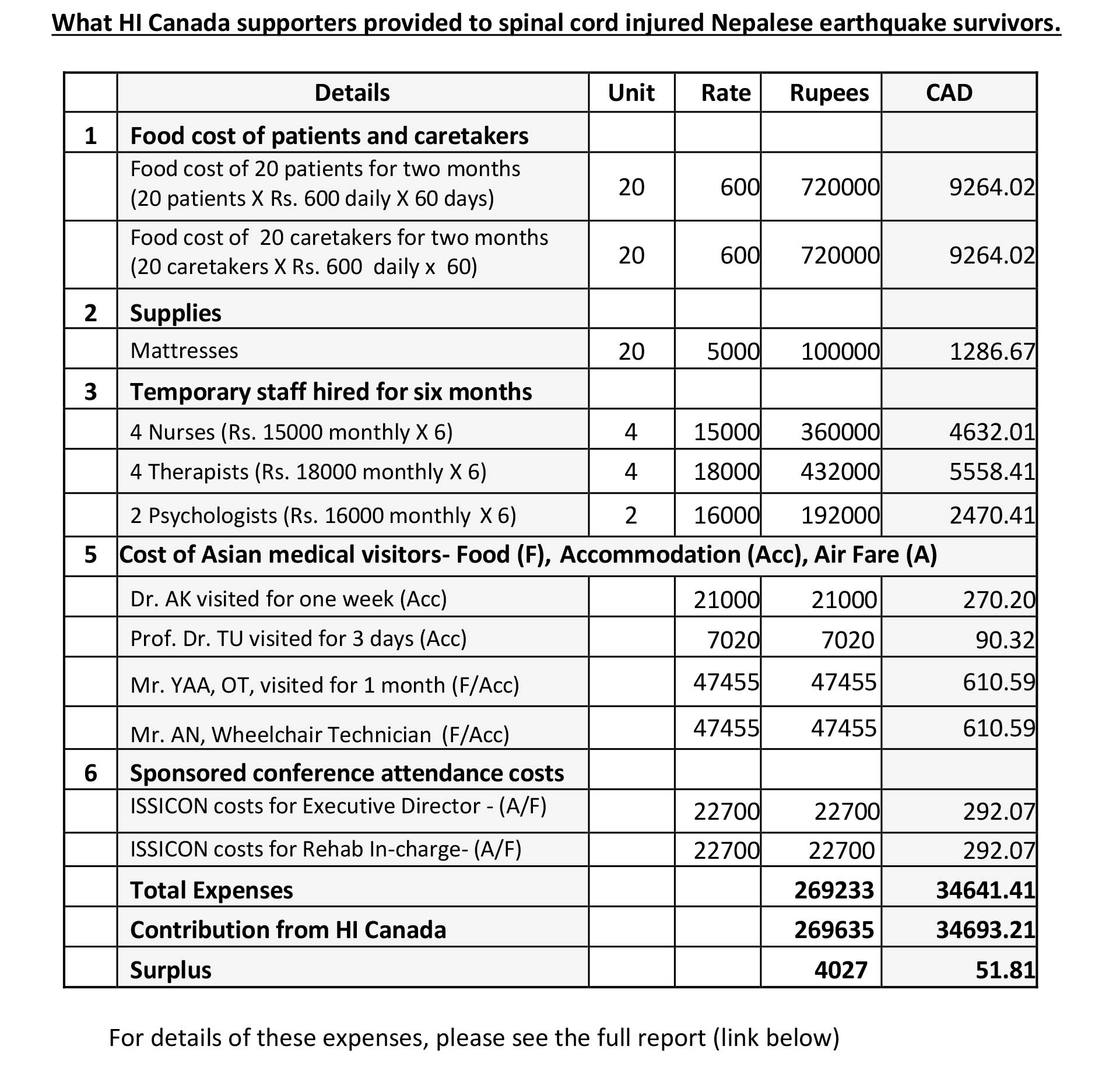 Thank you letter to HI Canada from SIRC

Raju, out of his cast but not yet fully weightbearing, was invited to the annual meeting of the International Society of Physical Medicine and Rehabilitation (ISPRM)  held this year in Malaysia. He took his compact scooter to work (centre) each day, either in a taxi (left) or on a rickshaw (right).

Prakash, still in the dark about the results of his written final exam, prepared in Karachi for the practical exams with a Nepalese friend. They worked with Pakistani residents and patients (using the Urdu language, needed to examine patients during the exam).

The second monsoon since the earthquake began June 15th (80% of Nepal’s rainfall arrives during the monsoon). Flooding  added to the problems of some communities already damaged in the earthquake.  The Nepalese Government’s National Reconstruction Authority (NRA) had still spent only 9% of its promised funds released in the first 9 months but the Authority announced that the NRA had signed agreements with 223,830 households of the total 533,058 households identified as ‘true beneficiaries’ in 11 districts. A total of 24,428 families from seven districts had received the Rs 50,000 first instalment of the pledged Rs 200,000 (CAD 2440) in rebuilding aid. Most householders found this very inadequate. 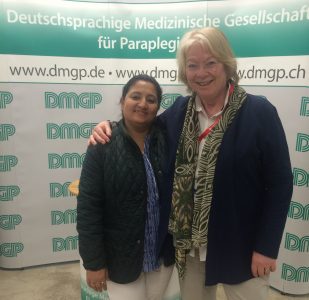 Renee Maschke make a presentation at the annual meeting of the Deutschsprachigen Medizinischen Gesellschaft für Paraplegie (the German Medical Society of Paraplegia – photo on the right taken in Hamburg). Esha was able also to visit the spinal injury centre in Murnau and, with husband Kiran, also stayed with Renee in her home near Perugia (where we Skyped with them). 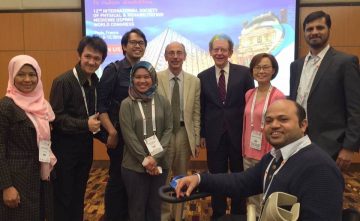 >Raju and Sheela were now four months into their last year in Dhaka, not an easy place to live. Sheela’s visa was finally extended to April 2017 but not before she had to come up with a USD100 “broker’s fee” after waiting for several weeks. Raju was an invited speaker at the annual meeting in Kuala Lumpur of the International Society of Physical and Rehabilitation Medicine (ISPRM), where he made a number of excellent connections. Here he is seen with local and visiting faculty.

Prakash passed his written exam; the oral exams were deferred to the end of July so that he was not able to take up the three month fellowship he was offered in Delhi. But, imagine our delight when he passed the Fellowship exams first time (teh pass rate for Nepali candidates was 20-25%).

Back in Kathmandu, Prakash began work on a sessional basis at Bir Hospital, one of the two government major trauma hospitals.

Raju had met problems with the defence of his research project thesis and was now working for his final clinical exams, with the added requirement of the thesis defence in March 2017.