We hit the jackpot when we met Drs Raju Dhakal and Prakash Paudel. They are two exceptional and dedicated young doctors whom we not only mentor but with whom we have forged enduring bonds of friendship. Both successfully passed their specialty exams (on their first try). 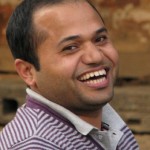 Polio afflicted Raju as a child. To this day, crutches restrict him physically but his spirit and determination are unquenchable. Raised in a remote village three days’ walk to the nearest bus, his parents must have recognized his ‘specialness’ for they had the perspicacity to send him to live at the SOS Children’s Village near Kathmandu. His parents’ sacrifice was his salvation. In Raju’s own words:

In the core of my heart…I wanted to be a doctor…. It was first time the SOS Children’s Village…had received such a request, and no disabled person had ever dared to study medicine. Full of doubt and uncertainty, but with a determined heart, I went to Village’s national office and explained my interest. National Office was positive about my proposal. It was the second time my eyes filled with tears, BUT this time it was tears of joy and celebration! It was the most memorable moment in my life….

When we met Raju in 2009, he had just begun practising at SIRC, and was also working two other jobs – teaching anatomy and covering night call in a local emergency department. That meant that he could only work part time at SIRC during his first months there. He had placed well in his medical school class. At SIRC, he cared for about forty patients with the assistance of two nurse clinicians. We began teaching sessions with him and found his brain was like a sponge, thirsty for knowledge. He attended two Asian Spinal Cord Network (ASCON) conferences (one in combination with the annual meeting of the International Spinal Cord Society (ISCoS), visited the Indian Spinal Injury Centre twice and in early 2011 won an observership position at the National Rehabilitation Hospital in Ireland.

We discussed various options with Raju for credentialing in Physical Medicine and Rehabilitation or other specialty, and carefully explored the options for out-of-country and out-of-region training. North American training was prohibitive in cost and we realized that there are some other benefits to regional training: the likelihood of return to work in the home country is greater and the management technique taught are based in an economy similar to that of Nepal. He was accepted by the PM&R program at Bangabandhu Sheikh Mujib Medical University in Dhaka, Bangladesh, and began his residency training in March of 2012, qualifying as a specialist in PM&R in the spring of 2017. For this training, we provided tuition expenses and a monthly stipend for five years, as well as money for airfare for periodic visits home. We have worked closely with the Spinal Injury Rehabilitation Centre in Nepal to ensure his financial support through his five years of training and back into practice in Nepal – he began work as Medical Director in May of this year. We will also explore with him opportunities for additional SCI training. He has done consistently well on examinations, and maintains great enthusiasm for his studies.

Raju and Sheela were married on October 16th 2012 and were together in Dhaka until she successfully completed her Master’s degree in public health. Sheela returned to work in SIRC in the fall of 2015 following the earthquake.

Raju and Sheela returned to Kathmandu in May 2017. Raju is now the medical director of SIRC and is the senior doctor. Raju has already begun discussions with the SIRC administration and board on the topic of founding a rehabilitation training program. SpiNepal will assist as needed in this development. Sheela now works for the Karuna Foundation in Nepal. We talk with them every few weeks.

Prakash’s story is no less inspiring. As he tells it:

Having been born…in one of the most remote parts of the nation, even a notion of acquiring a good education was a farfetched dream…. My father can barely read and write, whereas my mother was illiterate…. It was in…my ninth grade, when the concept of medical school was introduced to me…. I lost my mother…as a result of a crossfire between armed rebels and security forces right outside my doorstep…. I got to know about it a day later, amidst friends discussing the prospect of medical school.

Prakash worked in the community prior to developing his interest in spine work. He was working at the Kathmandu Model Hospital as a neurosurgical medical officer when we first met him, where he undertook a research project focussing on the role of folic acid in prevention of spina bifida. His paper “Awareness of periconceptional folic acid supplementation among Nepalese women of childbearing age: a cross-sectional study” was published  in the journal Preventive Medicine. He placed well in the qualifying exams of the Pakistani College of Surgeons (commonly used in Nepal) but was unable to afford the training and exams beyond that would qualify him to proceed with neurosurgical training. With our encouragement and backing he began this residency with the support of the local neurosurgical head. He completed eighteen months of general surgical residency at the end of June 2012 prior to entering the three years of neurosurgical training. He received credentialing as a neurosurgeon and is now a fellow of the College of Surgeons of Pakistan, a qualification accepted in Nepal. (He was awarded the gold medal for the highest marks in the examination.)

Prakash worked in Bir Hospital in Kathmandu for about one year after passing his specialty exams. He was awarded a three-month fellowship in neuroendoscopy in Greifswald in Germany (fall 2017) and is now working in Mediciti Hospital in Kathmandu. He is still enhancing his qualifications and will seek a spine surgery fellowship. He attended and presented a paper at the AO Global Spine Conference in Toronto in May 2019. The subspecialty of Spine Surgery, which is open to neurosurgeons and orthopedic surgeons with (usually) a one-year fellowship, is evolving in Nepal and in due course it is likely that a major trauma centre will develop a focussed spine program.

Nepal still needs more rehabilitation physicians to provide rehabilitative care of spinal injured and patients with other disabilities. Indeed, Nepal needs its own training program in rehabilitation medicine and will in turn need more specialists to act as faculty to train rehabilitation medicine specialists. Realizing the need of specialized rehabilitation services in Nepal and considering our request of support, SpiNepal has agreed to sponsor the completion of rehab specialty training of another Nepalese physician, Dr. Jas Bahadur Gurung, during his residency training program in Dhaka, Bangladesh. Dr. Jas Gurung is a physician from Pokhara who worked for six years at the Green Pastures hospital in that city. He became aware at that time of the potential benefits of and the need for high quality medical rehabilitation. In 2015 he began his rehab residency in the BSMMU program in Dhaka, the same program that Raju completed. Nepal’s major earthquake happened soon after he began and he was able to join the medical team led by current BSMMU Rehab department head Dr Taslim Uddin and Raju (who was still a resident then) that returned to provide medical care as the newly injured patients began to arrive. At that time he and Raju established a good working relationship.

As Dr Raju says: “We expect that Dr. Jas will smoothly complete his residency training program in Bangladesh and return to serve in Spinal Injury Rehabilitation Centre (SIRC), Nepal. He will work with us at SIRC to enhance the quality of SCI care and will join the team planning residency training program of physical medicine and rehabilitation in Nepal. At this time we wish to again thank Canada’s SpiNepal and Nepal’s Spinal Injury Sangh, and to congratulate Dr. Jas Bahadur Gurung for aligning his goals with ours.”