Dr Raju had narrowed down his training options to those within the Asian region. After a thorough and successful interview, he began a five-year rehabilitation medicine residency at Bangabandhu Sheikh Mujib Medical University (BSMMU), Bangladesh’s first and only medical university, on March 1 2012.

We launched our web site in the spring, with a lot of help from our friends in Nepal and in Canada – we are still getting helpful suggestions – keep them coming! 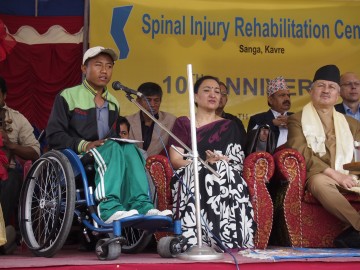 A patient shares his story at the 10th celebrations

The tenth anniversary celebrations, in wonderful Nepali style, went on for nearly two weeks. A big ceremony took place at SIRC. Spinally-injured when a bus went over a cliff, Ram Bahadur (right) sings a ghatana about his experiences, a saga of his injury and rehabilitation. You can hear this at http://www.youtube.com/watch?v=sS0NM6JcwX8  (Photo by Franziska Reding-Barer. Rupa – thank you for your blog at http://rupajoshi.blogspot.ca/2012/04/sircs-tenth-anniversary.html )

At the beginning of the celebration, a UNCRPD workshop (United Nations Convention on Rights for Persons with Disabilities) held at SIRC involved many local members of the disabled community working with SIRC staff and an Irish team from Livability.

A Swiss team from the Notwill spinal injury centre visited to participate in teaching SIRC staff. We worked closely with Swiss SCI physician Hans Georg Koch on the training of recent graduate Dr Nabina Shah, who came down to Delhi soon after to join us in an SCI workshop on which we were faculty. 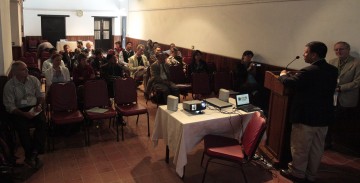 We organized a disaster preparedness program to take place over two days, arranged by SIRC staffer Sandra Boone with physiotherapist Damodar Thapa and Peter.  Nepal is a high-risk earthquake area. On the first day, local experts from Nepalese government departments and INGO representatives met with staff from SIRC. Right, at the disaster workshop, retired Nepali forces Colonel Ratindra Khatri delivers a spellbinding account of the (2010) Haiti earthquake which took place during his UN service there. In his capacity as Nepalese National Contingent Commander of the UN Mission in Haiti, he was also one of the first responders to the devastation. By good fortune he was out of his office in the UN building when the quake struck, as the office building was destroyed in the upheaval. His slide presentation can be found at: http://www.un.org.np/sites/default/files/attachments/col_002-r_khatri_presentation_on_haiti_earthquakex.pdf . He is now working in the newly established Strategic Centre for Disaster Risk Reduction Nepal (an NGO).

On the second day of this program, earthquake trainers from the Nepalese National Earthquake staff worked with SIRC staff to prepare them for what to do in the event of a major earthquake (right). Later, the alarm bells rang out and a training exercise was underway. 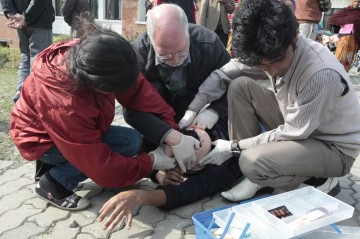 Hans Georg joined us for a workshop in Kathmandu on disaster preparedness with other NGOs as well as on a disaster drill for staff at SIRC. Left, two Swiss team members work with SIRC physician Nabina Shah on a ‘casualty’ at the SIRC.

We were supported for this project by a grant from the International Spinal Cord Society – thank you ISCoS!

SIRC’s neighbours queue for the clinic

Oh – did we forget to mention the wheelchair basketball tournament at an outdoor court about a half-hour walk from the Centre, with games in the Centre for those patients who could not get over there? And there was a staff barbecue to celebrate our good fellowship and, to cap the week, a small get together with the board members in Flavors Café.

From Kathmandu, we went to Delhi for a week. If you look carefully, you will find Drs Raju, Claire and Peter in this photo of the ElearnSCI project team at the conclusion of an intensive week’s workshop in which all the educational modules were presented, reviewed, discussed and edited in preparation for go-live in the fall of 2012. 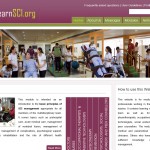 The home page of ElearnSCI

The International Spinal Cord Society (ISCoS) had received a generous grant from Access to Care in 2011 to develop a free online educational resource for health care workers providing care to those with new or established SCI. We worked in this project (based in Delhi) and believe that this resource, launched at the ISCoS annual meeting in September 2012, will benefit people with new spinal cord injuries in many areas of the world. If you want to learn more about this, click here.

ICSoS 2012 and the Paralympics

September found us in London primarily for the annual meeting of the International Spinal Cord Society annual meeting. A session at which international programs were highlighted was well attended – there was considerable interest in our small project. ElearnSCI went live and has already been visited by thousands of interested healthcare workers around the world. The Paralympics in London were also a delight – we caught a few key games after the ISCoS meeting. Another big event was to follow…… 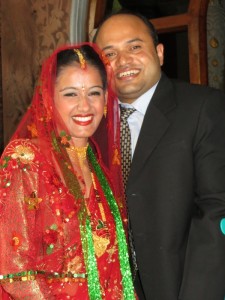 The happy couple: Raju and Sheela

The wedding date was moved up at short notice, but Claire and Peter were able to change travel plans and made it from London to Kathmandu for the celebration with families and friends. What a wonderful week! The two days of celebrations in Kathmandu were followed by a trip to the village of Jaubari in Gorkha district – a distance of only 120 km but that took 10-12 hours in a bus because of road conditions. There we stayed with Raju’s parents and met his family and many neighbours who celebrated, with song dance and abundant food, Raju’s return after many years.

Back in Kathmandu, we also managed to meet with Prakash, his supervisors Drs Bista and Dhital, and a number of other colleagues while we were there. Finally, we did some aggressive shopping for items for fundraising.

We were busy immediately upon return to Vancouver with a long-planned fundraising program.

Through a combination of sales and donations from generous friends we raised our first full year’s budget needs. Another big thank you, to all who helped us in this necessary task.

This year, we worked with other teams and individuals who are providing support to SIRC and will continue to ensure that any overlap is useful to SIRC staff and others in the Nepalese health system. Below, Board members Kanak and Shanta with Swiss team members from Mountains to Mountains and from the Swiss Paraplegic Centre in Nottwil. 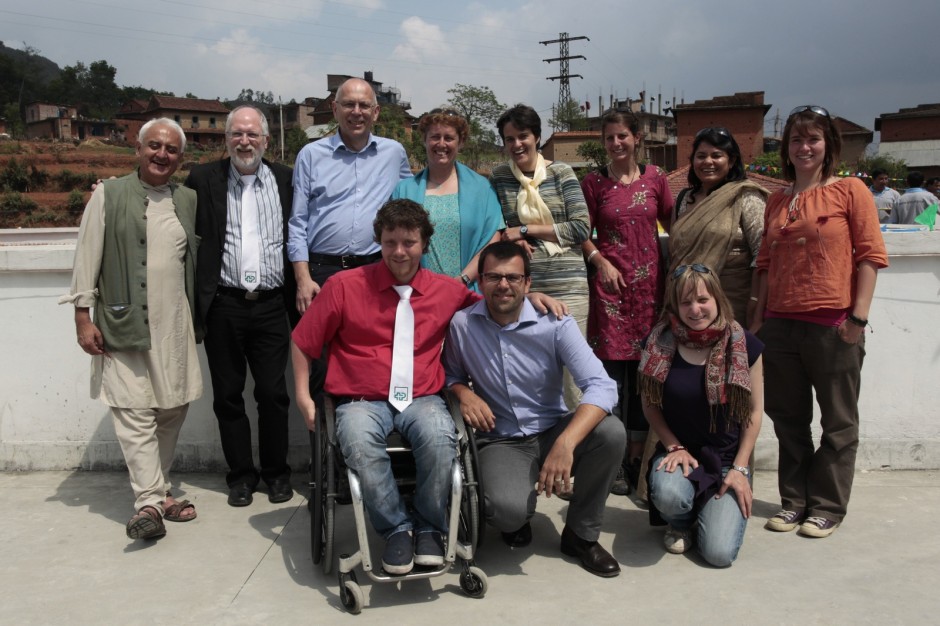